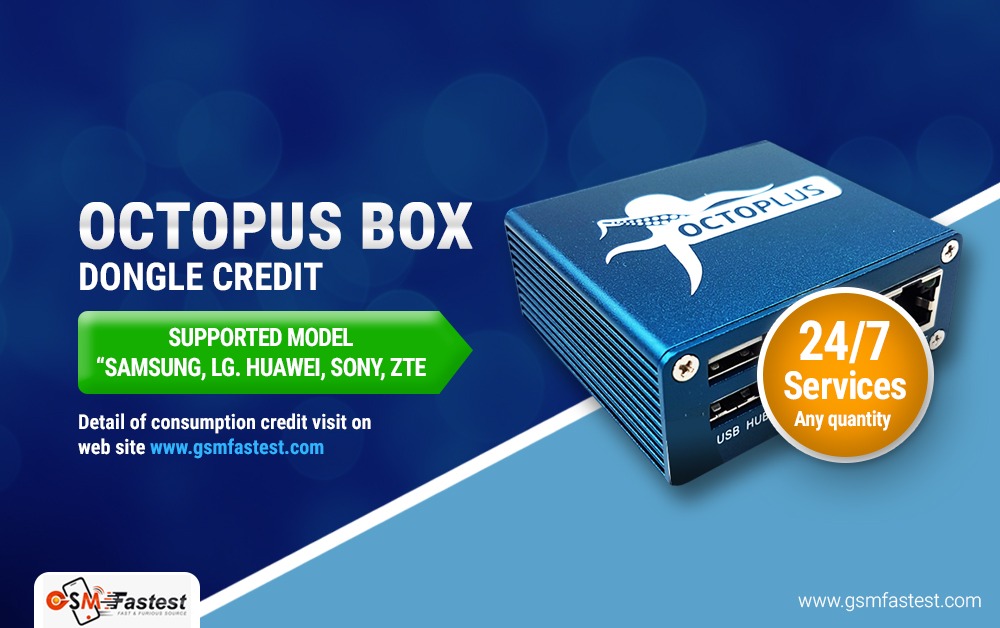 This product is a result of developers' own solutions which makes it the most reliable servicing tool on the market.

Please note that minimum order is 50 credits.
If you'd like to purchase Octoplus Credits for already existing account, please specify it in "Customer's notes" field while ordering the item or contact your sales manager. Otherwise, automated system will create a new account for Octoplus Credits.

Q.1: Where can I find login and password for Octopus Server Credits service usage?

A.1: You have to purchased Octopus Server Credits first. Following a successful transaction, you will receive an email, with all the information about your new account, including your login and password.

Q.2: I have a certain amount of credits on my account, however, I do not have enough of them for a certain operation.

A.2: You have to order the required amount of credits. While ordering, in the corresponding field, you need to specify all your current account details, and how many credits you lack. Otherwise, we will create a new account with purchased amount of credits.

Q.3: I had a certain amount of credits on my account. I ordered some more credits for a certain operation from a reseller. However, the reseller created a new account. How do I combine my existing credits with new ones?

A.3: You need to contact our technical support by online chat or you can send an email to [email protected] with a detailed explanation why do you need to combine two accounts and those account details.

Q.4: I forgot or I do not know my login username or login password for my Octopus Server Credits account.

A.4: Please, make sure that you have purchased Octopus Server Credits before. If you did not buy them, then you need to make a purchase. After that you will receive an email, with all the information about your new account, including your login and password. If indeed, you forgot or lost your password, then it is recommended to contact our support by online chat or you can send a request to [email protected] In the request form you must specify your Octopus Server Credits purchase order number, then we will able to help you restore or change your password.

Q.5: I am trying to enter the login and password for boot-loader.com account or other services / websites and getting an error about incorrect login.

A.5: Logins and password from other services (boot-loader, etc.) are not suitable for logging into Octopus Server Credits account. These are different services; they are not related to each other.

Q.6: I made a request to unlock my phone through the service of remote servers but the phone was not unlocked. How do I get my credits back?

A.6: In case the phone was not unlocked, you have to send us the following information:

On the following electronic address: [email protected]
After that, you will need to film a video, in high quality (HD), which will confirm your unsuccessful unlock procedure. That video should clearly show phone's IMEI number, phone's model, how it is locked and the unlock procedure, during which can be seen unlock code entering, evenly and slowly. Then upload your video to YouTube.com and send the link to a video to technical support team. After you video reviewed and analyzed by development team, a decision will be made. You will either get your credits back or receive a consultation, stating that has not been done correctly and how to fix it.

Q.7: I made a request to unlock the phone, but later realized that I made a mistake and phone model is incorrect, I need to unlock other device. How do I get my credits back?

A.7: Unfortunately, in that case wrongly spent credits cannot be returned, because your request has been already processed by remote server and it is waiting for the completion of unlock procedure. Please be more careful when you submit your request, make sure that you enter correct device data.

Q.9: I have sent a request to unlock the phone with IMEI number begins with 99XXXX and locked by Sprint or Verizon. Device was not unlocked. How do I get my credits back?

A.9: Please be advised, if the phone is locked by Sprint or Verizon and IMEI number starts with 99XXXX, that device cannot be unlocked. In this case credits will not be returned.

Q.10: When I send a request to unlock the phone, I receive the following message “Service is busy! Try again later”

A.10: This particular message means that remote server is busy right now or being under maintenance. Please try to submit your request a couple of hours later.

Q.11: When I send a request to unlock the phone, I receive the following message “Could not connect to the server! Your IP is in black list!”

A.11: This particular message means that you have tried to input incorrect username or password of your Octopus account too many times. Because of this, to protect servers, your IP address has been blocked on the server side. Your IP address will remain blocked for approximately 30 minutes. Please make sure your account information is correct. Possibly, answers (of this manual) to question 1 or 4 will help you.

A.12: At this moment FRP unlock service is unavailable. Recommended to check the current status of the server here. Please be advised, if you submit a request to unlock FRP and server’s status would be “unavailable”, your credits won’t be returned back on your account.

Online support for 7 days and 24 hours a day.